As will be well known, Thornæs Distillery works closely with the small Scottish Highlands distillery, Strathearn Distillery, to build a whiskey distillery in North Zealand.

Therefore, it is also appropriate to tell a little more about the history of Scottish distillery, because it is certainly a story with many interesting details.

When Strathearn Distillery saw the light of day in 2013, it was something as unusual as a small Scottish whiskey distillery. In fact, the distillery's maximum capacity was set at 15,000 liters of bulk per year, which was a fraction of the smallest whiskey distillery on the edges so far.

For founder and inventor Tony Reeman-Clark, it was a dream come true, when he could inaugurate his own distillery a small quarter drive west of Perth. The idea of ​​a micro-distillery was spun by the success of microbreweries, but unlike the beer industry, the rules for Scottish whiskey production were not geared at all to such a small player.

This led to a number of discussions with Scottish legislators and not least the established whiskey industry. Shortly after the inauguration, the founder therefore decided to found a brand new trade association, the Scottish Craft Distillers Association, which could speak for the smaller distilleries.

Today, Tony Reeman-Clark is known as one of the industry's great innovators. From the start, Strathearn Distillery experimented with life and action. Whiskey was matured in barrels of wood other than oak, distilled on cider and made a local version of the Dutch gin. Some of the experiments were a challenge to Scottish law and repeatedly caused the established trade association, the Scottish Whiskey Association, to raise their eyebrows.

One thing they could not question, however, was the maturation of whiskey in 40-50 liter barrels. Maturation in quarter-casks was a controversial innovation back in 2013, but if you look in the history books, the idea was not without precedent. The small barrels were previously used diligently because they could be transported on horseback and were convenient to move, not least when the customs officer was on the move…


4,000 British pounds for the first bottle

For Strathearn Distillery, the small barrels have proven to be the road to success. So much so that their first bottle was sold for quite a surprising amount. The way it happened, the founder told investinperth.co.uk in 2017:

“We did not know what to do with our first bottles, which explains why we chose a website with 12- weekly promotions, to celebrate our three-year anniversary from the receipt of our license. To be honest, I figured I would have to call family and friends in week 10 to promote some bids, ”Tony Reeman-Clark explained. However, that was out of the question.

“The reality was that we were offered each bottle every 10 minutes. Within two weeks, bottle number 1 was offered up to £ 2,000. ” 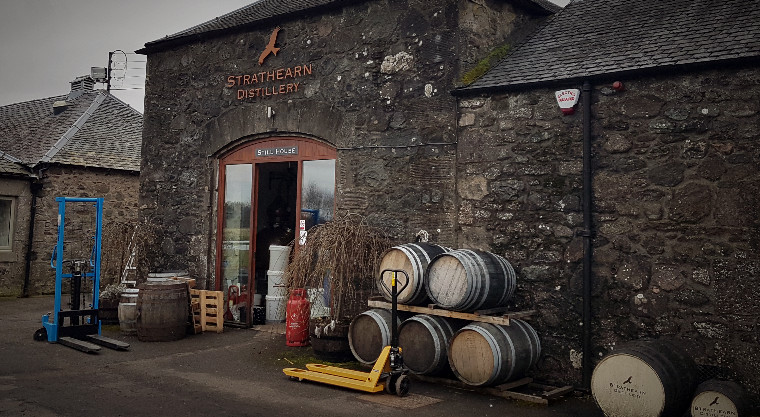 The headache disappeared with the cut

The reason Tony Reeman-Clark even founded his own distillery was because one day he tasted a whiskey that did not give him a hangover. The analytical side of him quickly found out that it was all about when the master blender took the cut. The new knowledge spurred him to start for himself, because as he noted, suddenly he found himself in a country that, in line with France, had its very own gastronomic identity - not red wine, but whiskey.

I Today, Strathearn Distillery is recognized for its full-bodied and silky-soft whiskeys that ripen in small barrels and are always delivered by barrel strength.At the same time, they have won great recognition for their range of gin, which initially helped the distillery through the first difficult years financially. The success means that the distillery today is well on its way to doubling their whiskey capacity and establishing a separate gin distillery in Perth.

Right now you can buy two of Strathearn Distillery's first bottlings on this page. Choose from whole bottles or sample bottles.

That was the drop! About water and whiskey